So these days, I’m not into doing much. I did pull Elise around the block in her wagon when we had 70 degree weather, but mostly I try to just sit. Elise has generally given up on me playing on the floor with her when her dad’s around; she’s giving me lots of floor time off. (On this lovely snow and ice day, she and her dad are playing legos on the floor as I type.) Elise and I have become great at watching movies together on the couch. And my growing belly which Elise loves to comment on is going to keep me off the floor for awhile. 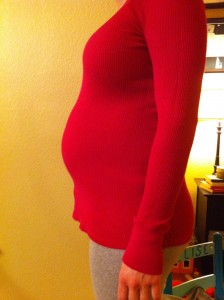 Now, other people, like my younger brother Johnny, are doing a lot of physical activity. Johnny is in the Dallas Fire Academy, and he has been sending me videos of things he has to do which are much harder than sitting on the couch.

The first video he sent me was of the church raise. A church raise (if I understood correctly) consists of climbing a 45 ft ladder sticking straight up in the air, locking your legs, and then doing a back bend like you would need to if you were changing a light bulb in a church. Then you climb over the ladder and down the other side, but don’t worry there’s some cushions at the bottom in case you fall. I’m out on that. In the video Johnny says, “I can’t reach sir.” He was supposed to reach his foot down to the third rung before he locked his legs and bent backward. But after he says that you see blue sky, so he still managed to do the back bend.

Then the second video he sent was of him doing ventilation where you cut a hole in the roof. You simply put on your gear – suit is 15-20 lbs, SCBA (Self Contained Breathing Apparatus) is 47.6 lbs. when filled with air, and carry a 6-8 lb axe. Then climb up the ladder and swing away. Again, out on that. I did not miss my calling in life. Oh, and you need to do this skills test in under 5 minutes or you’re fired. No pressure. Johnny’s ventilation video is 1:39s, so he’s good. I like that you can hear the other guys cheering him on and saying, “Let’s go Fairleigh,” and when he delivers the final blow to the middle of the wood. Check it out.

10 Replies to “Lounging vs Training”