My brother, Johnny, finished the first part of his training as a Dallas firefighter and is now officially a rookie. His class showed us several things they have learned: rappelling, church raise, helio something, burn house, propane tank simulation. Elise had fun watching and cheering on the firefighters. 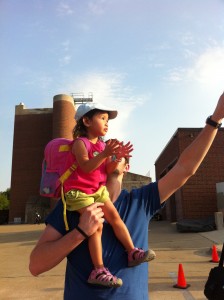 Johnny’s biggest part was the burn house. He was on the engine that responded first, Engine 54, and he was the guy on the nozzle which means he operated the hose in the fire. He was the first one to enter the fire. In the video, he’s the one kneeling down at the door; then you sprays of water coming out of the house after he enters until he finishes. You also here Elise and I talking a lot, so it’s pretty well narrated. 🙂

Then after officially becoming rookies and shortly before the closing prayer, the chaplain said, “There’s a young man that has something to say, but I’m not sure which one it is.” And Johnny stepped forward to propose to his girlfriend Erin. He had been nervous that something would happen like the chaplain or instructors would forget to give him time to propose, but it was perfect. They’re engaged! 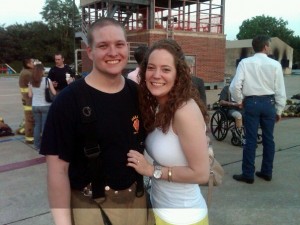