After being up with my youngest at midnight last Thursday, I realized it was the Lunar New Year (Friday, January 31) and I had completely forgot. I started poking around online and found a website that finally explained Tet, Vietnamese New Year, in a way I understood. So I planned to at least try to make sticky rice with peanuts and a version of boiled chicken – both traditional Tet foods. When it came time to serve dinner my rice still wasn’t cooked (5 minutes in the microwave fixed that) and I wasn’t impressed with my seasoning of the chicken, but I served it. And Elise was over the moon with her Vietnamese food on Vietnam day.

I only managed to get a picture of my precooked food. I promise I didn’t serve raw chicken. I seasoned it with lime peel, ginger, salt and pepper and I baked it instead of boiling it. And the rice I think needed an hour instead of 30 minutes to steam. It was a learning experience. 🙂 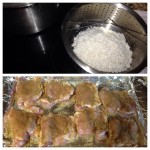 Elise said things like, “This Vietnamese food makes me think of Vietnam …. I used to eat this is Vietnam.” Now I am no expert in Tet celebrations or Vietnamese cooking, but I was amazed at Elise’s response to my meager efforts. It showed me that she needs me to try to figure this stuff out; it is meaningful for her. And I am happy to get it wrong and make mistakes while trying to help her identify with her country of origin. Because as she channeled Elsa from Frozen, she said, “The perfect girl is gone (from Vietnam) because I am not there.”

And here’s my nod at the tradition of wearing the color red. It’s the wrong country but it’s all I had. 🙂